40,000 ecommerce stores generating $10-15m annual revenue are running on WooCommerce. Off the back of an envelope, that’s a market worth half a trillion dollars.

Some of these retailers want to take advantage of headless architecture, but in most cases, replatforming is not an option. Costs are either too high, or the scale of the undertaking too daunting.

But where there’s adversity, there’s opportunity.

Chris Lemmer, co-founder and product manager at SwiftCom, a digital agency based in Pretoria, South Africa, has taken on this challenge.

Listen to the podcast with Chris here, or read the article based on it below.

Chris and his team have built a free integration between the WooCommerce and Vue Storefront, a popular, headless customer experience solution,  allowing smaller businesses to decouple their front and backends and start their composable commerce journey.

In this article, see how the dependency on legacy architecture presents an opportunity for systems integrators (SIs) and vendors by taking a closer look at ecommerce midmarket  in South Africa and beyond.

Secondly, we’ll look at the importance of mining the knowledge of technical leadership, technology companies and at retailers, to solve common customer problems.

Finally, we’ll explore how SIs and vendors can work together to better serve overlooked small-to-medium retailers, who may be potentially valuable customers, and who are facing business critical challenges around implementing new technologies.

How mid-market retailers are struggling with legacy ecommerce platforms

Many SME retailers want to take advantage of composable commerce solutions, since they recognise that frequent releases in the customer experience are a key factor in marketing-led growth.

This market has been off-radar, however, for many composable solution providers – who have understandably focused on the enterprise market. SMEs – and the technology they’re using – have not seemed much of a priority.

WooCommerce may be regarded as ancient history by some in the headless community – but the reality is that for smaller retailers, it’s a very suitable platform. The ability to quickly add new functionality, using plugins, provides attractive flexibility and affordability for growing businesses. With no upfront cost, it makes a lot of sense in those early years of growth.

However, as the business grows, these plugins and their associated data storage slow down operations, reducing the ability to adapt to increased sales volumes. Chris explains:

“If you start out as a very small business and you grow and you survive the first few years, you get more staff members, you get more integrations, you really start investing in your WooCommerce tech stack.

You then reach a point — let’s just say five years into your business — where you’ve probably gone through the third iteration of a WooCommerce store, and you’ve invested a lot, and you are starting to see a store with 50 or 60 plugins that you’ve bought over the years. Your database is cluttered with additional data. And now you’re stuck at a point where it’s slow.”

Some may be surprised at the size of the companies working in this way.

SwiftCom compiled a list of 100 major retailers in South Africa and found that the majority were using WooCommerce; this included Weber, a premium grill manufacturer with global sales of almost $2bn in 2021.

The sheer size of this market means it’s served by a wide network of South African digital agencies.

These are the common issues that prevent businesses of all sizes making wholesale architecture changes in one fell swoop. This was neatly summarised by Joel Farquhar in a previous episode of Martalks.

“Large enterprises are moving towards API-first/MACH-type technologies gradually, because a wholesale replacement of that platform is not realistic for them… So a lot of them are using the strangler pattern: segregating out customers, pricing, inventory, etc., either leveraging existing platforms, or in a lot of cases we’re building custom cloud-native microservices for them.

With complexity you gain agility, which is why our customers are driving towards MACH, but we can’t fool ourselves into thinking what we are ultimately going to deploy is significantly more complex than a monolith.

With a monolith, it’s reasonably easy to figure out your total cost of ownership. One of the biggest challenges we see with our customers making this shift is in wrapping their heads around the cost of it. That’s where we’ve come in, helping our customers understand the costing model and the long-term technology implications.”

Joel is talking about enterprises, but SMEs face the same obstacles with composable architecture.

However, smaller businesses also enjoy certain advantages. Many of them will have simpler business models (i.e., perhaps with no or few franchisee locations, relatively simpler product data, etc.).

At these retailers, their greatest technological opportunities most likely lie not in ambitious back-end replatforming projects, but in the adoption of other microservice upgrades – particularly around marketing performance.

Furthermore, the smaller scale of these businesses mean that there is often a shorter line of communication, from the team implementing the technology, to the business owner who eventually signs off the investment.

As many technology companies are finding, this opens up an alternative sales channel, via API integrations which can be easily implemented by the customer’s development team.

To bridge the gap with the mid-market, agencies and vendors can innovate around the day-to-day issues faced by technical people customer-side.

SwiftCom’s integration between Vue Storefront and WooCommerce is an example of this approach.

“This Vue Storefront integration that we’re working on is a solution allowing store owners and WooCommerce developers to access this technology, but keep on using their existing stack.”

Chris’s team at SwiftCom hypothesized that a lot of developers working on WooCommerce would be facing the same roadblocks as they were, in developing the client’s customer experience.

Chris’s team conducted some market research to validate their theory. They built a landing page describing the capabilities of their planned integration, and then paid for sponsored Reddit ads targeting the developers regularly working with WooCommerce.

For a small fee of $250, they gathered 30 email addresses of developers subscribing to their beta program.

From there, they interviewed 10 of those sign-ups, asking about the challenges they were facing. They found that the issues were the same for their contributors, regardless of their location (the cross-section of interviewees included developers from the US, UK, South Africa and Mauritius).

“So we know there’s a problem there, we know we’re solving something for our target audiences: those developers that are doing work for agencies, and giving them a tool that they can use to solve the problem for the agencies.” 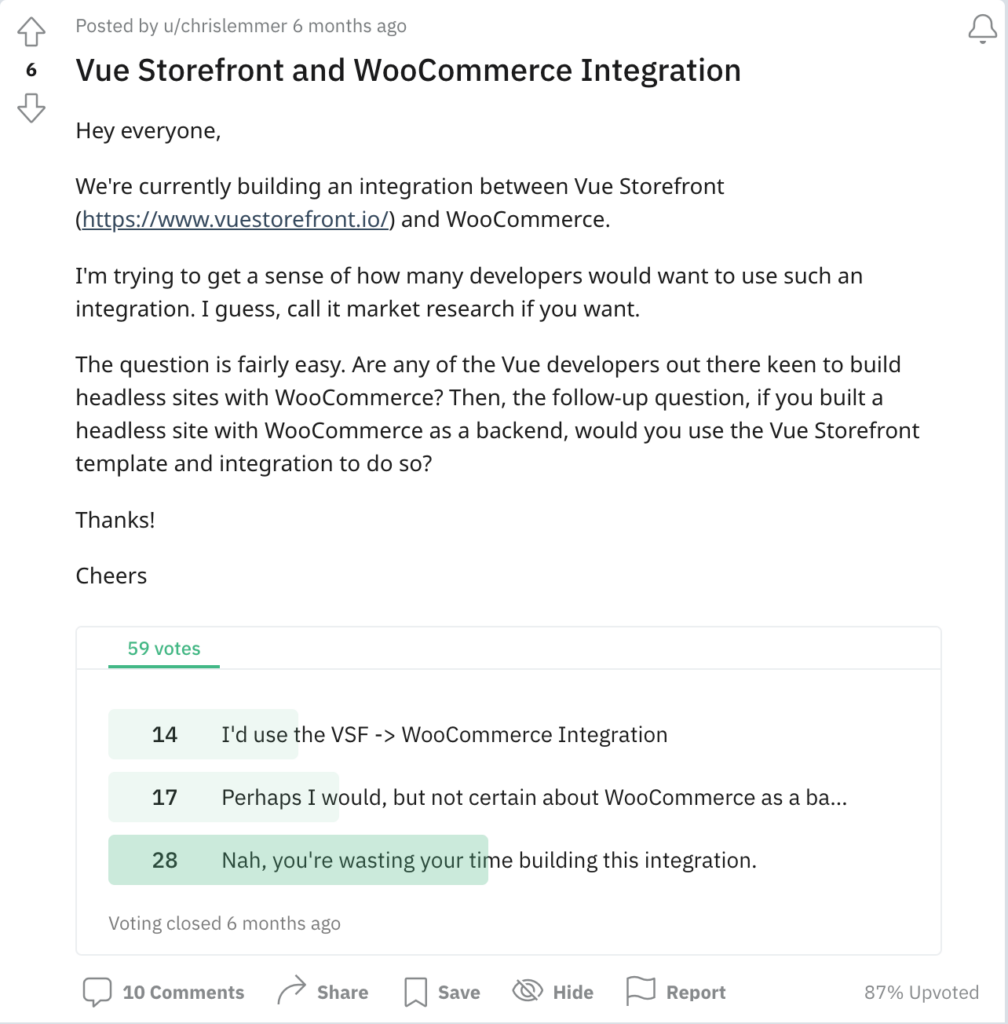 Chris and his team have created a product of value by going where these vendors might be unable to go. Digging into these cracks, and finding the pain points have allowed SwiftCom to better understand a core profile within the industry, create a solution, and build a community around it.

The trend, of techies selling to techies, is increasingly widespread on the martech landscape. Chris says they view technical leaders as the primary audience for the integration…

“Our initial personas are going to be the developers. So going into the developer communities, as we’ve done with the Reddit ads,with organic posts, and polls… they are really the people having the problem. They’re running WooCommerce, they’re feeling the pain, and this is solving that pain for them.”

…and that a different marketing approach is required for the business leader.

To reach the business leader, Chris advocates the use of content and thought leadership as a means of detailing the effect solutions can have on KPIs. This marries up the needs of the developers with that of the business.

“A secondary approach to that would be more thought leadership. Get into the mind of the business owner, who knows they’re using WooCommerce and WordPress, and has heard the developer constantly saying we have these problems, and then saying, ‘Hey, guys, isn’t this potentially a solution?’”

This need – for a two-pronged sales approach – is a common theme on the Martalks podcast. During our webinar in spring 2022, Brian Walker, the chief strategy officer of Bloomreach explained mid-market retailers are unlikely to have a CTO or CDO with extensive knowledge of the latest ecommerce technology. SIs and business development executives from vendors will most likely be talking to the owners or CEO of the retailer.

Similarly, Rajib Das, the CEO of Ignitiv, a digital agency, said he requires business development professionals to combine understanding of technology with deep knowledge of their clients’ benchmarks. The easier life for developers, that composable solutions enable, carries less weight than the need for demonstrable impact on the business’s KPIs.

As Chris points out, many of the leaders in the commerce industry at large have a background in technology.

“A lot of developers are going to the business side of the industry… they understand the challenge that a developer has in building a solution… Understanding the impact that software has on the business and the architecture of that is very important.

So realistically, technology companies will always need to nurture both business people and techies.

But as the gap shrinks between technical and business knowledge, technology companies will inevitably find that their routes to market change over time.

How SIs and vendors can share information to better serve retailers

Now that CX agility is widely recognised as a major competitive factor in retail, technology companies innovating around this space stand to enjoy profitable business.

This is happening rapidly at enterprise level; the rise to fame of Vue Storefront – alongside a host of other composable customer experience solutions – is evidence of that.

But too few retailers in the mid-market currently feel able to benefit. As Chris describes here, most retailers still  believe that their current ecommerce architecture leaves them making unfortunate tradeoffs between performance and user experience.

“There’s this constant balance between performance and user experience, and often businesses prioritize one over the other without realizing that all these things influence each other.

“I think the big thing is, if you go with the composable commerce route, you’re not completely compromising your performance and your user experience; it’s always this constant balance between: if your site is faster your user experience lacks, and vice versa. So those really are our goals that businesses have.”

The technology community knows that, in reality, these are not ‘either-or’ choices. Whilst the Vue/Woo solution has met a specific market need, many other composable solutions can be integrated with legacy ecommerce architecture – making it practical and affordable for businesses of all scales to capitalize.

The major learning from Chris’s experience is that this works both ways. The right integrations, and the right partnerships, make it practical and affordable for enterprise-class solutions vendors to reach SME retailers, and the significant untapped profits at that level.

Chris explains that he has shared the findings of their research with Vue Storefront; he argues that integrations such as SwiftCom’s are a learning opportunity for vendors.

“I think they learn from every integration. We’ve shared some of the findings and ideas, for instance. They think that was very creative. But we have shared some of our findings that we had in the industry with them, which they also found interesting and was news to them.

I believe every integration that they build, whether it’s themselves or the community, they will learn.”

Vue Storefront has become the fastest growing front-end solution on Github, thanks in part to its open-source nature, allowing teams like Chris’s to sell their solution into areas of the market that Vue Storefront may not otherwise be able to reach.

SwiftCom is a relatively small agency that has gone above and beyond to create a free solution to a commonly-held problem.

As vendors and agencies continue to share information on customer pain points, they will learn to serve and succeed in fertile, yet untapped markets.

The Vue/Woo tie-up is a simply brilliant case study in business-driven collaboration, which every technology company can learn from.

Looking for a job
I'm hiring